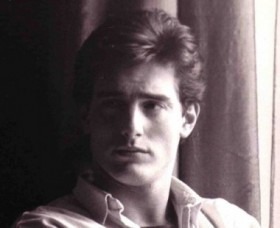 Painter and visual artist, Alain Lame has called many times our curator Geraldine Beigbeder to organize his openings.

The starting point of Alain Lame’s artistic career is a work on madness. A manifesto denouncing the excesses of an unhealthy consumer society through misleading logos. Luxury brands.

During his previous exhibitions. He has shown two important trends in his work. What he calls his “homage to the masters”. With a good dose of subversion or irony.

Alain Lame presents us this time the table at the base. From Greek or Roman times. The painter starts from the beginning. While moving away from the often obtuse message of contemporary art. Live this experience back to drawing. At the sketch. Like redoing the road, relearn. Then, little by little. A destructuring of the aesthetic occurs. Aesthetics of the body and dismemberment. Unusual position Androgyny of the characters. These are the inspiring subjects of painter’s works: oil. Drawings in ink. Walnut and pencil. The recreated harmony is a fuzzy harmony. But the tribute to the masters of Alain Lame is done. 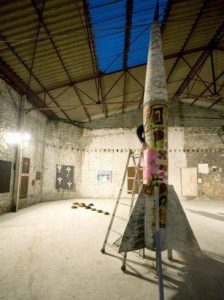 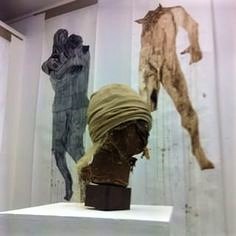 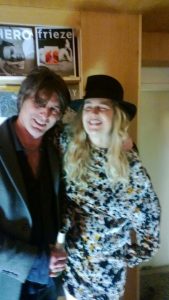 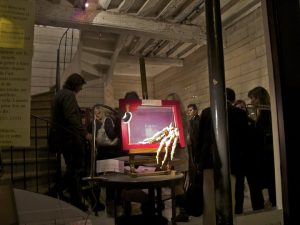 Do you want HappenArt to organize your exhibition or event? The HappenArt team will study your request and send the estimated cost. We do not take any percentage on your sales.
For your quote, here is our form. GO⇒ 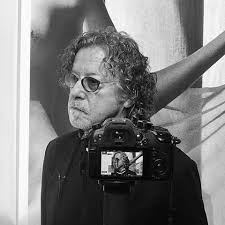 “Provocative Moods” is a personal exhibition of photographer Robert Farber in Paris with the collaboration of our curator Géraldine Beigbeder.

The Galerie Mark Hachem presented “Provocative Moods”. A personal exhibition of Robert Farber curated by Géraldine Beigbeder for HappenArt.
The exhibition presents “THE DETERIORATION SERIES. A collaboration with time”. A series of classic Farber photos take between the 70s and 90s. That have naturally been deteriorated by time. No retouching or manipulation were made. Only the natural process of deterioration.

Robert Farber’s style has influenced generations of photographers. Through his international exhibitions in galleries and museums. His ten books of classical art have sold more than half a million copies. 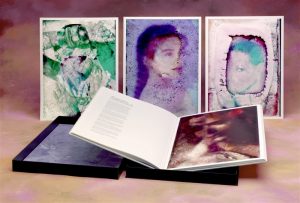 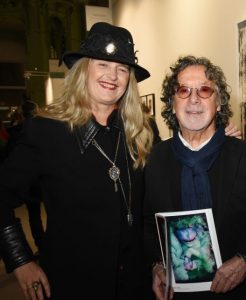 He has worked with Jackie Kennedy Onassis. Larry Flynt among others. Robert Farber’s global recognition has been established through his books. His art exhibitions. Lectures. Television interviews. And award-winning advertising campaigns. All in the genres of fashion, beauty and lifestyle. Farber’s work on artistic nudes. As well as in the commercial field is known and respected. 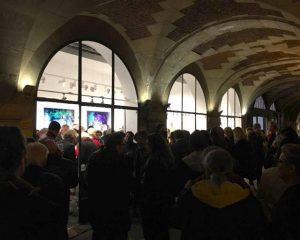 Artist, Curator or Fashion designer. Do you want HappenArt to organize your exhibition or event? The HappenArt team will study your request and send the estimated cost. We do not take any percentage on your sales.
For your quote, here is our form. GO⇒ 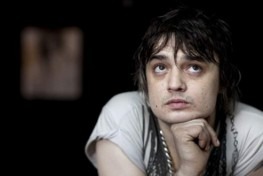 In Paris. Barcelona. Geneva. Museum Rimbaud. The leader of the group Rock “the libertines” Peter Doherty has trusted our curator Géraldine Beigbeder for his exhibitions his works.

Peter Doherty and his works are in the spotlight in Paris.

Géraldine Beigbeder our curator HappenArt presents the exhibition “Flags from the old regime” of the English rock star Peter Doherty. Canvas. Works papers. Installations and videos meet in the confines of this discreet loft in the 11th district of Paris. To highlight the artistic creation of this bad boy with restless but nevertheless brilliant reflections. The opportunity also to discover the work of the artist of Albion. freshly installed in Paris.

For Geraldine Beigbeder, her curator. Pete Doherty is the illustration of the “wild genius child”. He creates by momentum, by moments and by irrepressible need. As the child would, fragile and without prescription. Without limits. He tests them, freed from the fear of death. Through various substances or experiences. Without limits, too, are his means of expression. Pen, pencil … or syringes. Textures, materials or liquids. Photos, lettrism and painting.

“Flags From the Old Regime” is the name of a traveling exhibition that settles in Barcelona.

As for the message of his works. He is like that of his songs and poems. “Spontaneous. Childish. But terribly serious”. As Géraldine Beigbeder, curator of the exhibition, says. Besides, she nicknamed Peter Doherty “Wild Genius Child”.

Geraldine says of Peter Doherty: When I was asked to become Peter’s curator. I was a bit confused at first. And I mostly heard about him as a musician, writer, poet. I did not really know his work as a painter. A visual artist. Since then. I have been lucky to discover another part of him. And I have clearly become a big fan.

Artist, Curator or Fashion designer, do you want HappenArt to organize your exhibition or event? The HappenArt team will study your request and send the estimated cost. We do not take any percentage on your sales.
For your quote, here is our form. GO⇒ 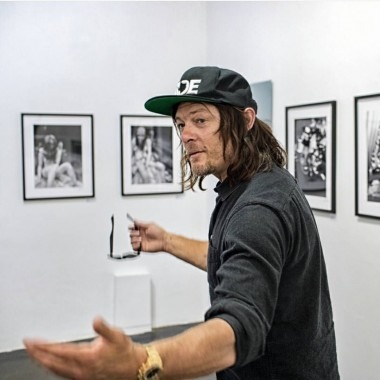 Actor and Photographer Norman Reedus. Trusted us to organize his photo exhibition in Paris and Barcelona in 2017, with our curator Geraldine Beigbeder.

A big thank you to Norman Reedus who gave an interview to our Platform HappenArt during his photo exhibition at Miami  (dec, 2019).

Norman Reedus is a multi-disciplined photographer, director, filmmaker, and actor. He is widely known for his current role as Daryl Dixon on AMC’s The Walking Dead. Norman Reedus also has a successful new travel series. Ride with Norman featuring motorcycle road trips which is enter- ing its second season on AMC in 2017.

Norman has a deep passion for photography and has been taking photos throughout the en- tirety of his acting career. His photographs are beautiful and terrifying. Macabre and provoking. Alternately dark and sublime. The recurring theme in his images is making the disturbing beauti- ful. His work has been exhibited in Europe and in the United States. Berlin. Hamburg. New York City. San Francisco, and Los Angeles. His photographs have been published in a limited edition collector’s volume titled The Sun’s Coming Up…Like a Big Bald Head (Authorscape 2013). 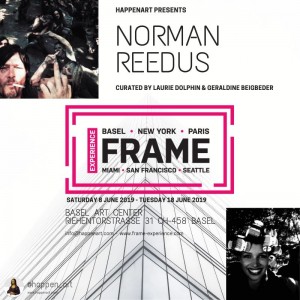 Norman is a multi-faceted artist. Actor recognized worldwide for his role in the series The Walking Dead. He is also a model. Producer of short films. In 2013 he publishes a book of photographs. “The sun is coming up … like a big bald head”. These are photographs that have since been exhibited in Paris and Barcelona. These exhibitions was conceived in collaboration with Géraldine Beigbeder in 2017. 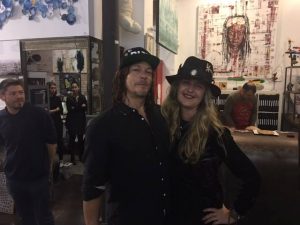 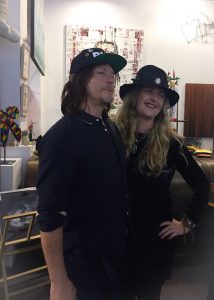 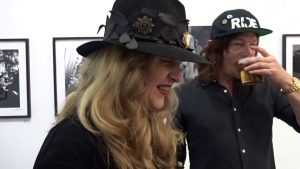 The photo exhibition of Norman Reedus

Norman still has a camera in his hand. For 25 years he has been photographing his world. During his travels. During his shootings. “I like to make beautiful with dark images, I like to reveal beauty in the grotesque, panicked, desperate and ridiculous”. His universe is intimate, disturbing and dreamlike … 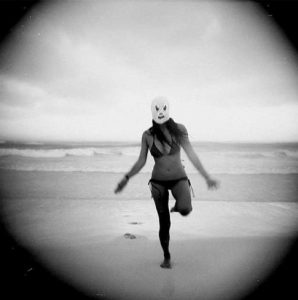 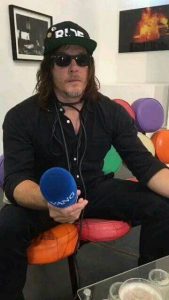 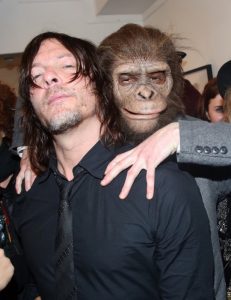 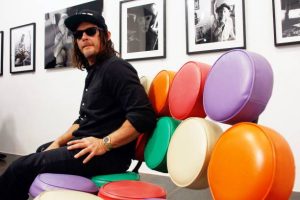 “For the exhibition, we made a big choice on the photos compared to the book, explained Géraldine Beigbeder. All the pictures talk about his life. From his personal anecdotes from his shootings … “ 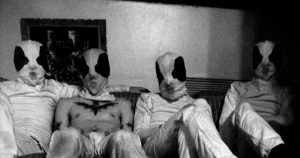 Indeed, his exhibitions are journeys to the heart of the world of Norman Reedus. At once rebellious and poetic, disturbing and sublime.

He shows great tenderness for each of his models.

Artist, Curator or Fashion designer, do you want HappenArt to organize your exhibition or event? The HappenArt team will study your request and send the estimated cost. We do not take any percentage on your sales.
For your quote, here is our form. GO⇒ 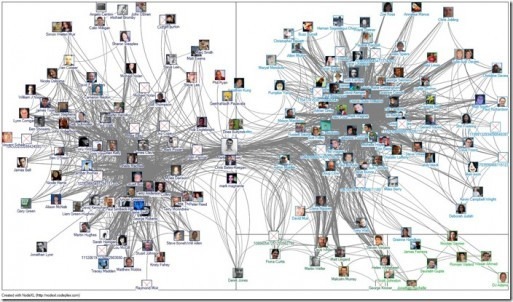 As an Artist and Curator. We can find you the place to organize your event: Gallery. Contemporary spaces. Castles. Museums and much more. In Paris, New York, Los Angeles or Belgrade.

We organize for you your:

Opening. Coktail. Invitation cards. Press and you will benefit from a focus on our Platform and all our social networks.

WE DO NOT TAKE ANY PERCENTAGE ON YOUR SALES.

The transport of your works remains at your expense.

Submit your request on the form available below and ⇒ Our Team will give you a price to organize your exhibition or event.

After study of your submission by ⇒ Our Team, we will send you a summary quote of the price of our services.