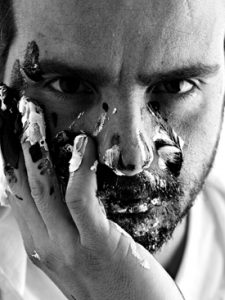 Around the age of 6, Troilo already showed a great talent for drawing. Thanks to this, just as early, he began to prepare the pathological anatomy tables that his father, an anesthetist, ordered him for medical conferences.

He studied at the IED in Rome and at the University of Florence (Architecture and Literature) without completing any of these courses.

From 1997 to 2009, he worked in two of the world’s most reputable advertising agencies: Saatchi & Saatchi and Arnold Worldwide.
Named best Italian creative director in 2007. (Grand Prix of the Club of Artistic Directors of Italy)

In 2004, he took up self-taught painting. The day he decides to do it, he forgets to buy brushes and paints with his fingers, this technique, combined with almost hyper realistic results, makes him a unique artist in the world.

2009, he left the “applied art” of advertising to definitely follow pure art.

2011, just after being selected for the 54th Venice Biennale. He left the art galleries with which he collaborated to begin his career as an independent artist. Paolo exhibits all over the world thanks to his friendship with international patrons and art foundations.