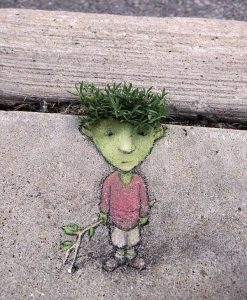 David Zinn has been creating original works of art in and around Ann Arbor, Michigan since 1987. For over twenty years he has freelance work for a wide variety of commercial clients while simultaneously introducing “useless” art. In the world at large. His professional commissions included theatrical posters. Company logos. Educational cartoons. Landfill murals. Environmental superheroes. Hand painted corporate allegories and dump trucks. His less practical designs involved coasters. Restaurant placemats. Cake icing and snow. Now, thanks to the temptations of a sidewalk chalk box on an unusually sunny day, Mr. Zinn is known the world over for the art he creates under his feet.

David’s temporary street drawings are composed entirely of chalk. Charcoal and found objects. His drawings are always improvised on the spot thanks to a process called “pareidolic anamorphosis” or “anamorphic pareidolia”. Most of its creatures appear on Michigan sidewalks. But many have surfaced as far as the subway platforms in Manhattan. Village squares in Sweden and street corners in Taiwan. It has gained worldwide notoriety through sharing on Facebook pages. Instagram. Huffington Post. Graffiti Art Magazine. Bored Panda. Central China Television. Street Art Utopia and Endless Geyser of Awesome by Archie McPhee. His most frequent characters are Sluggo (a bright green monster with rod eyes and irreverent habits). Philomena (a phlegmatic flying pig), but the diversity of Mr. Zinn’s menagerie seems to be limited only by the size of the sidewalk and the spirit of the day.