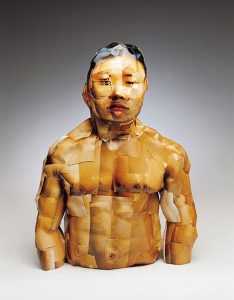 Osang Gwon’s mission is to demolish the line that separates the medium of sculpture from that of photography. He accumulates photographs to build sculptural forms. He sets up sculptural forms to compose photographs. Gwon relishes the ambiguity that confuses the viewer. Is his work two-dimensional or three-dimensional? Or both simultaneously?

This creative method fuels the artist’s fascination with modern marketing. Shiny appearances and consumer culture. He derives themes and extracts motifs as the subject of his works. Academically trained in sculpture, Gwon has aroused interest in the circles of sculptors as well as photographers.

Dedicated to his most famous series, “Deodorant Type”, the book Gwon, Osang: The Sculpture was published by the Arario Gallery. His work can be found in numerous local and international exhibitions. As well as in publications that present and present contemporary Korean art. Gwon has organized solo exhibitions in South Korea, the United States and the United Kingdom. Her work was featured in the international traveling exhibition, Roundabout, which traveled from New Zealand to Israel.