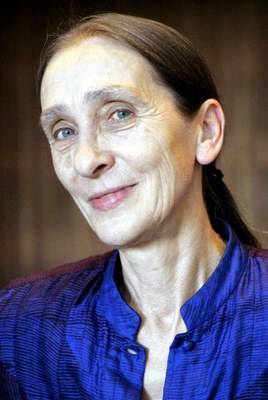 Pina Bausch was born 1940 in Solingen and died 2009 in Wuppertal. She received her dance training at the Folkwang School in Essen under Kurt Jooss, where she achieved technical excellence. Soon after the director of Wuppertal’s theatres, Arno Wüstenhöfer, engaged her as choreographer, from autumn 1973. She renamed the ensemble the Tanztheater Wuppertal. Under this name, although controversial at the beginning, the company gradually achieved international recognition. Its combination of poetic and everyday elements influenced the international development of dance decisively. Awarded some of the greatest prizes and honours world-wide. Pina Bausch is one of the most significant choreographers of our time.

In 1978 Pina Bausch changed her working methods. Invited by the director of the Bochum theatre Peter Zadek to create her own version of Shakespeare’s Macbeth. She found herself in a difficult situation. A large portion of her ensemble no longer wished to work with her as there was little conventional dancing in her pieces. She thus cast the Bochum guest performance with just four dancers, five actors and a singer. With this cast she was unable to deploy choreographic steps and so began by asking her performers associative questions around the themes of the play.

The result of this joint investigation was premiered on 22 April 1978 in Bochum under the lengthy title Er nimmt sie an der Hand und führt sie in das Schloss. Die andern folgen (He takes her by the hand and leads her into the castle, the others follow) and was almost drowned out by the storm of protest from the audience. Yet in making this unusual move, Pina Bausch had finally found the form her work would take, its dream-like, poetic imagery and bodily language justifying the worldwide success she soon achieved. In taking people’s essential emotions as its starting point – their fears and needs, wishes and desires – the Tanztheater Wuppertal was not only able to be understood throughout the world, it sparked an international choreographic revolution.

The secret of this success may lie in the fact that Pina Bausch’s dance theatre risks taking an unflinching look at reality, yet at the same time invites us to dream. It takes the spectators’ everyday lives seriously yet at the same time buoys up their hopes that everything can change for the better. For their part, they are required to take responsibility themselves. All the men and women in Pina Bausch’s pieces can do is test out, with the utmost precision and honesty. What brings each and every one closer to happiness, and what pushes them further from it; they cannot offer a panacea. They always, however, leave their public in the certainty that – despite all its ups and downs – they will survive life.