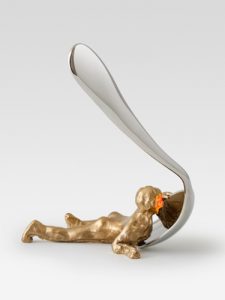 Urs Fischer was born in 1973 in Zurich, Switzerland. He studied photography at the School for Design before continuing his training at De Ateliers in Amsterdam. Then, Delfina Studio Trust in London. From the start of his career, Fischer understood how to create a diverse universe. Composed of objects, figures and environments. All imbued with a sense of the absurd and irony. Fischer is indeed considered one of the most irreverent and intelligent artists of his generation. Through his open-minded use of materials, he disrupts the way we usually think about space. It makes us question our traditional approach to things. For example, he makes life-size chalets in PaiN. Portraits of people whose faces are covered in fruit. Holes in the walls. Crumpled beds and pianos. Also, compositions based on brioches and butterflies. Fischer’s world is colorful and unpredictable. His interest in the popular imagination. As well as the objects of our contemporary society. Have led Fischer to create works in which the usual context of things is subverted to create new forms and meanings.

Among his most important works are his wax sculptures. Like candles with a wick, once lit, they are consumed by time. Becoming molten shapes and finally mounds of wax on the ground. Materials that self-destruct. Wax or bread are at the heart of many of Fischer’s works. He enjoys exploring the endless possibilities of materials. He uses them to introduce another dimension to his works, that of time. His frequent and ironic quotes make Fischer a collector of series of subjects. Works and themes of art history, to which he gives a whole new dimension through his subtle but paradoxical perspective. With its large-scale installations and recreations of entire environments. It gives the viewer the possibility of physically experiencing something intangible: the creative process.